Range Rovers are known for being luxury vehicles; they have a long and proud history coming from humble beginnings from the iconic Land Rover. The Range Rover was first launched in June 1970 and it was a great success and went on to win many awards over the years.

In 1992 the 108inch long wheel base version was released, this is when Range Rover first introduced air suspension. The idea behind this was to increase the handling of the car and to also lower the car to allow the drivers/passengers ease of access getting in and out. The air suspension would drop to its lowest height when the car came to a stop. The air bag suspension replaced the traditional steel springs for the suspension, this same design was used for 25 years. The modern Range Rover Evoque & Discovery have some common faults, especially the L322 Model which has its fair share of air suspension problems. Some may say something that is over engineered is designed to fail. 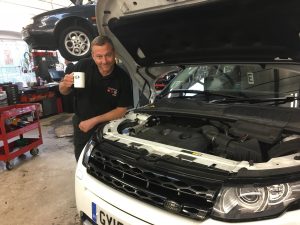 Having this technology can be very beneficial but as with any car, problems can occur over time. The air suspension can wear out through general usage or the system might not fair so well after years of use. The air suspension system is made up of many different components which can be contributing factors to cause issues for the whole system. In 1995 three years after Range Rover first introduced air suspension they made it standard on every vehicle. Known as the EAS or Electronic Air Suspension, this systems software allows the user to inflate and deflate the air springs depending on the speed of the car and the terrain.

When dealing with an air suspension problems it could be down to any or all of the major components that make up the system. Here is a list of the different components:

Air Bag Problems – The air bags over time can develop leaks. This can be caused by the rubber losing its strength due to the age or mileage of the car. Also climate can be a contributing factor or even just general maintenance like cleaning under the arches after being off-road can cause the rubber to perish.

Height Sensor Problems – The height sensors are designed to measure the distance from the ground as the name suggests. They sit on all four corners in close proximity to the air bags. The sensor can be damaged by the vehicle being exposed to rough terrain or harsh weather conditions. If the sensor or wiring becomes loose or damaged it can cause the whole suspension to be stuck at one height or sagg.

The Air Compressor and Storage Tank Problems – Air compressors tend to fail after many years of being used. This can cause a lack of air being pumped through the system which will cause an error message to appear. Another fault may be down to a faulty relay, which turns the compressor on and off.

Valve Block Problems – If the valve block fails it can shut off the air traveling to the air bags. This tends to be a more expensive component in the system, so can be a costly repair.

Electronic Control Problems – This can be down to your control panel or wires that may have been frayed. We would suggest taking it to a professional who will run a diagnostic routine on the whole system. This will help to identify faults.

Things to Look Out For

How We Can Help

At Kingham LR we are Land Rover Service & Repairs specialists. We have been a family run business since 1959. We can help you diagnose & fix any Range Rover Air Suspension problems you may be having. Our dedicated and professional team have many years experience working with Range Rovers.We can provide you with a quick quote, please just let us know the vehicle registration number and current mileage.