A Land Rover smashed through the window of a railway station ticket office in a cash machine robbery.

Officers were called to Wokingham station in Berkshire at 02:20 BST to discover one machine had been stolen.

The suspects from the green four-by-four fled the scene in a dark vehicle believed to be a BMW or an Audi before abandoning it, police said. 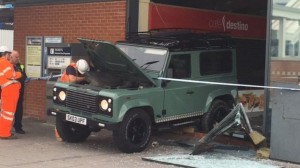 An eyewitness, who lives opposite the station, said the car was left empty with the engine still running following the crash.

South West Trains (SWT) said train services at the station were unaffected although the booking hall remains closed due to the damage.

“We have additional customer service staff at the station to assist customers in buying tickets and we are assisting police with their inquiries into the incident, including providing them with CCTV footage”, a spokesman said.