A GRANDDAD bravely chased after car-jackers who stole his Range Rover – with his little grandson still inside.

Ian Jones, 64, was left battered and bruised after risking his life to save the two-year-old tot who was later found in the abandoned car. 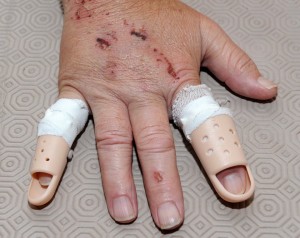 “I didn’t care about the car, or me, I just wanted my grandson to be safe.”

Ian was forced to stop on a busy city road during morning rush hour when a woman stood in the middle of traffic to block him from passing. 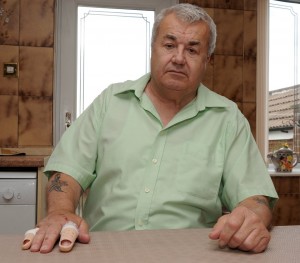 Ian, from Gleadless, Sheffield. said: “She was dancing in the middle of the road in fairyland, she must have been on drugs or something.

“I got out the car and told her ‘you need to move or you’ll get run over’, but she didn’t move.”

“Then this bloke jumped in and drove off. I couldn’t believe it.

“My grandson was still in the back and my only thoughts were for his safety.

“It was truly terrifying. I was worried sick for my grandson.

“That’s the only thing I was thinking about.

“I ran after my car and a van driver, who had seen what was happening, drove into the road to block his path. But he forced his way through.

“I ended up trapped between the van and Range Rover for a brief time. I was lying in the middle of the road, black and blue, in real pain watching my car being driven off with my grandson in the back

Thankfully Ian’s gold coloured Range Rover was found abandoned a few hundred yards away from the scene in Burngreave Road, Sheffield with the little boy inside, safe and unharmed.

Ian phoned 999 immediately, fearing the worst for his grandson.

He added: “This bloke must have realised my grandson was in the back because he abandoned the car nearby and ran off.”

“Fortunately my grandson was unharmed but my arms and hands could be permanently injured.

Ian, who lives with wife Kath, also 64 added: “The main thing is that my grandson is safe.

“But it was a close call and I feel lucky things turned out the way they did.”

A man and two women have been arrested in connection with the incident and remain in police custody.

A South Yorkshire police spokesman said: “Police were called to an incident on Burngreave Road at about 7.45am on Monday, June 20.

“The owner of the car suffered some injuries as the car was driven off.

“It was later found on Brunswick Road.”